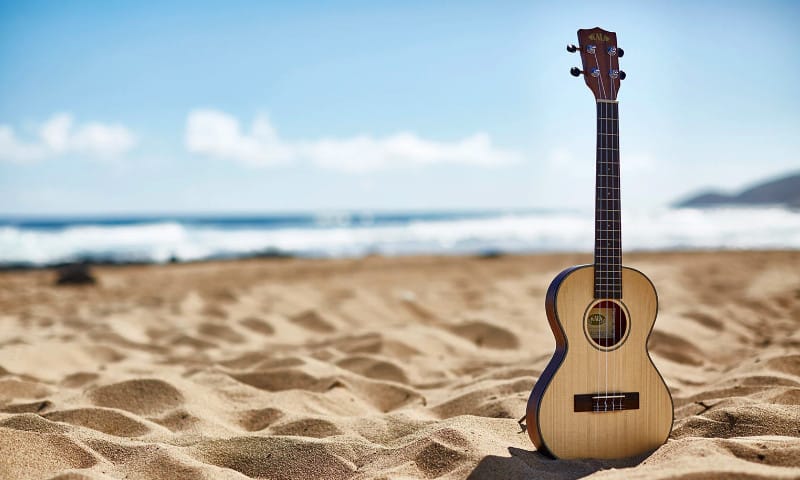 As the manager of a small acoustic music shop, I’ve played hundreds of Kala ukuleles over the years.

They have consistently proven to be well-built instruments that sound good and are comfortable to play.

Kala was one of the first major manufacturers of quality beginner ukuleles. While a number of other great ukulele brands have emerged in recent years to give Kala a run for their money, I still feel that Kala ukes offer great quality and value.

Overview of the Best Kala Ukuleles

Here are my 10 favorite Kala ukulele models. While I haven’t personally owned every single one of these ukes, I’ve been lucky enough to play most of them at some point during my time working in a music store.

Kala’s KA-15 series are affordable, no-frills ukuleles from one of the best-known ukulele builders in the world. This model also happens to be one of the top-selling, highest-rated ukuleles on Amazon.

I did a full review of the KA-15S and felt is was a great value and a solid starting point for anybody wanting to learn ukulele without spending a ton of money.

The soprano-sized KA-15S is probably the best-selling model, but I’d suggest taking a look at the larger KA-15C (concert) and KA-15T (tenor), which I feel are slightly more versatile ukulele sizes.

We carried this model for years in the music shop I manage, and it was one of our top-selling Kala ukes. Many people were drawn to the beautiful figuring of the wood and the vivid gold stain Kala uses to bring out the grain pattern.

Due to the natural variations of wood, each Kala Exotic Mahogany ukulele is different. This means that the one you end up with will be 100% unique, but it also means it may not look anything like the pictures you’ve seen online.

Kala offers this model in other sizes as the KA-SEM (soprano) KA-CEM (concert) and KA-BEM (baritone).

Kala has a history of using unique and exotic woods in their ukuleles, and the KA-EBY-T is a perfect example of their experimental spirit.

Ebony isn’t a wood you typically find on the body of an acoustic instrument, which is largely due to its high cost. However, Kala uses a laminated ebony on the KA-EBY series, so there’s actually just a thin veneer of ebony layered on top of sheets of other, less expensive wood.

The result is a striking ukulele with the beautiful properties of ebony, but without the price tag. Just keep in mind that, since this model features laminated back and sides, its tone won’t be dramatically different from less expensive models like the KA-T.

Many people assume ebony is pitch black, but that’s not the case. Much of an ebony log features figuring in the form of beautiful brown and tan stripes.

For years, instrument manufacturers avoided using striped or figured ebony, opting to use just the ultra-black core of an ebony log. Some builders would even go so far as to dye their ebony to ensure it was a solid, uniform black color.

This resulted in a lot of “imperfect” ebony logs being left to rot on the forest floor. However, efforts by companies like Taylor to embrace the natural beaut of ebony have helped shift public expectations while dramatically increasing yields.

The Kala KA-ATP-CTG tenor ukulele features a solid cedar top with laminated acacia back and sides. It has a couple other interesting design features like the padauk rosette and binding and the slotted headstock.

To my ear, ukuleles with a solid top usually have a voice that is warmer, richer, and more complex than laminated instruments.

However, there are lots of factors that impact a ukulele’s tone, and I’ve played many laminated ukes that sound amazing–sometimes better than solid top ukes!

My point is that if it’s in your budget to get a ukulele with a solid top, go for it–but if it isn’t, don’t worry about it. You can still get a great-sounding laminated uke without spending a lot of money, like the models I covered in my article on the best beginner ukuleles.

I’ve always loved walnut due to its rich, earthy color and bold striping. The Kala KA-PWT captures the beauty of walnut and packages it into a surprisingly affordable tenor ukulele.

This is a fairly basic model and features plain black binding and a satin finish. It’s a great choice for players seeking a unique ukulele that isn’t too flashy.

The KA-SMHT tenor ukulele is Kala’s most affordable all-solid wood ukulele. As I mentioned earlier, a solid wood top usually sounds better than laminated wood, so you can see how adding solid back and sides will further boost a ukulele’s tone.

Nearly all high-end ukulele brands only build ukuleles using solid wood, and for many players solid wood is considered the Holy Grail of tone.

A solid wood ukulele is the next natural step up from a laminated beginner ukulele, but it’s also a much bigger investment, so be sure you’re truly ready to take the plunge!

As part of Kala’s Satin Mahogany Series, the KA-T tenor ukulele is one of their flagship models. It’s a simple uke without a lot of bells and whistles, but that simplicity allows Kala to offer it at a good price.

This model, along with the smaller KA-C and KA-S, were easily the most popular Kala ukes we sold at my music shop over the years. They are consistently good-sounding, well-made, and easy to play.

As much as I love the KA-T, I’ve seen a ton of great entry-level ukulele pop up in recent years that are arguably better overall values.

Before taking the plunge on this model, have a look at my rundown of the best entry-level ukuleles I’ve played.

When I first saw Kala’s KA-SSTU-C Travel Ukulele, I’ll admit I thought it was basically just a gimmick. I mean, a ukulele is already pretty tiny–how much more travel-friendly could it possibly be?

However, once I had a chance to sit down and actually play one, I couldn’t help but to be impressed. I thought the super-slim body would result in a thin, weak tone, but these ukes sound great! I think it’s because of the solid spruce top and gently arched back, which both help bolster the uke’s tone.

I can also see how this uke would be better for travel than a standard ukulele. It includes a nice custom gig bag, and the whole package takes up a lot less space than a comparable full-size uke. Definitely easier to cram into a crowded car or overhead compartment.

While this uke isn’t for everybody, if you’re looking for a great-sounding uke to take with you on your travels, it’s certainly worth a look!

The pineapple ukulele was created in the 20’s by Sam Kamaka (of Kamaka ukuleles). In addition to their unique appearance, I think pineapple ukuleles tend to have a bit more warmth and bass thanks to a slightly fuller body.

I’ve always had a soft spot for pineapple ukuleles, and the KA-MK-P is the most affordable Kala pineapple uke you’ll find. However, a number of other manufacturers offer ukuleles in this shape, although I can’t speak to their quality, tone, or playability.

While the U-Bass isn’t technically a ukulele, it’s still one of my favorite Kala models.

With this model, Kala has somehow managed to squeeze the tone of a full-size bass into an instrument the size of a baritone ukulele. The U-Bass is tuned and played just like a bass guitar, but it’s about half the size!

I realize this model won’t appeal to most traditional ukulele players, but I still thought it was too cool not to include on this list. If you’re interested in learning more this model, check out my article on the best bass ukuleles.